We are a family run business with over 70 years experience between us. our core values are integrity, being transparent and completing all jobs to our own high standards. we believe quality is not expensive it is priceless. 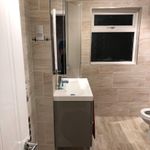 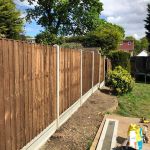 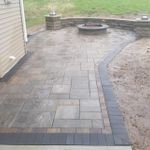 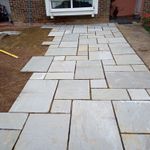 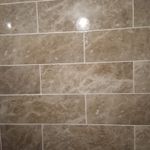 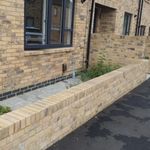 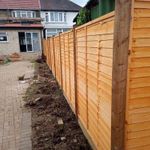 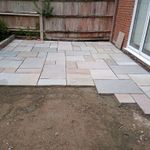 They were VERY quick.
And that's possibly their only plus.
The foundation ended up not totally square with the two long sides having a difference of 40mm. Luckily we had spec'ed it with a 50mm margin.

On the day, the first sign of something not being too great was when they brought in the mini digger. They had promised to put down sheets of plywood over a paved area but on the day they did not.
On day one they did the digging and put up ¾ of the shuttering. I measured it that evening and it was a bit out and unlevel.
The next day I mentioned that and they adjusted. Although the level they adjusted by pushing the low but up whereas I would have preferred if they had used the low part as the datum.
Anyway, they had promised to use heavy duty landscaping fabric under the type 1 and no DPM and I had said could they also fit a DPM on the day if I supplied it.
On the day, there was no landscaping fabric and they took my DPM under the type 1.
Still on day 2 I noticed that the steel reinforcement mesh was only enough to cover half the area but they said they'd get more towards the end. They also said they would use more DPM under the concrete itself.

While I wasn't able to watch them all day, they certainly did not use any more DPM although they take my whole roll with them (it was almost enough for twice the needed area).
I did not see them bring in any more reinforcement mesh, but towards the afternoon when I went out there they claimed it was already done.

Speaking of the reinforcement meshes, they had said they would use proper "meshmen" to space the mesh, but in the day they just mixed some concrete and then threw the mesh on top to end up in the middle.

Afterwards, I finally inspected the mess they had made of the curbside. It was very bad. No attempt to clean up. Spilled ballast all over the grass. The grass trampled and totally crushed by the digger. And no attempt has been made to offload materials onto some kind of sheet to keep things tidy. They were a team of around 5 people.
No wonder they were in such a hurry to leave on the second day. They had promised to show up in two days to remove the shuttering but of course they never did.

Lessons: in promises are easy, these guys need to be watched almost the whole time. More...

Hi Paula, I’m shocked you left this review as you seemed very happy with the work and paid before we left and also sent me an email to thank the team for their hard work in extreme heat. Hottest two days of the year on record 41c and 40c. Arrived on site and got told if we wanted a drink to use the hose pipe which was a bit strange. Like to address your points as I am very upset with this fake review 1. The 40mm out over a 30metre run which was corrected the next day. 2. The membrane we used you said you would supply and the remainder was left behind 3. Steel mesh were used correctly, very weird to say you couldn’t watch us all day because if you did you would Of seen they were used 4. Didn’t need to put boards down to protect patio it was a micro digger on rubber tracks 5. We had to move 15tonnes in total so there was a slight bit of mess out the front as was a long walk to your garden however this was fully swept up washed down and tidy Fortunately we have plenty of reviews from ‘normal decent people’ I have tried to reach out to you without any response

They were quick to respond and competitively priced, the job was completed very efficiently to a great standard and I would highly recommend Coulsdon Building Services

They were great. Prompt, helpful and went over and above what was required.

Very happy with the job done by Coulsdon Building Services. Great service from the moment I contacted them for a quote through to timely completion of the work.
They removed an old fence and replaced with new concrete posts and panels.
There was no side access to garden so they had to come through the house, but took care to minimize the mess etc.
Fairly priced and a good hardworking team who turned up on time and did a great job. Very happy with the result and I have since asked for a quote for an additional project.
Happy to recommend. More...

Coulsdon Builders are amazing they have done a amazing job fencing, bathroom front patio. Will be using them to do all my indoor renovations too. Highly would recommend the whole team. 👌 More...

Good working with them. Quality of work was above normal standard. Would use them again in need.

Very happy with the replacement fence which Craig's team fitted for me. The team were punctual and efficient and worked to a high standard. Would definitely recommend them.

Craig and mick done a brilliant job on my fencing job. Very quick and high standard. Would recommend

What guarantee does your work come with?

We love taking an idea of a customer and bringing it to reality. Happy customers and returning customers

Friendly, reliable and professional. We believe quality is not expensive it is priceless


A driveway is often at the forefront of your home and will be the first thing your visitors come across, therefore it is vital to make a good impression. A new or well maintained driveway can drastically change a homes marketability and appeal.
Materials generally used in driveways include pavers,tarmac,concrete and gravel.

As with any material, there are pros and cons. For example, gravel is the cheapest option but requires more maintenance but on the other hand, block paving is more costly. It is however resilient and comes in a variety of designs.


Choose from over 20 different materials for your new patio.


Our experiences fencing team carry out all aspects of fencing and gate installation and repairs.


With a wonderful range of kitchen designs from modern and contemporary through to the rustic country farmhouse, we can provide the perfect kitchen to suit all styles, tastes and budgets.

Experience the kitchen of your dreams with the help of Coulsdon Building Services.

A granite or marble worktop is an affordable and stylish choice to complete the look of any kitchen. Granite is also very hard wearing and incredibly durable, so even if a hot pan was placed directly on the surface it will not leave a mark or stain

Constructing a fully custom bathroom for you