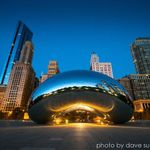 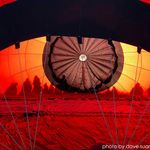 We used Dave for our July 2010 wedding and had a great experience.  Photography was really important to us, since it's really the best memory from the day and something that can be shared with those who couldn't join us.  When looking for a photographer, I sought someone who took great photos (obviously), had good bedside manner (it's awkward being in front of the camera, so we wanted someone who could 'warm us up') and it was very important to us that we would retain ownership of the photos, ie get a disc of them given to us afterwards that we could do what we wanted with.  We didn't want someone who we had to order prints off their website at a high cost.  I had in-person meetings with three photographers and Dave was the obvious choice.  I loved his work, I liked having a male photographer for some reason, and he just seemed like a cool guy that would be easy to work with.  We had an engagement session (included in the price) which was a great way to get to know him.  On the day of our wedding, he was a true pro.  He anticipated everything so he was ready to capture each special moment.  Working with him afterwards was really easy too.  He and I both selected our favorites to be put into our album (which turned out gorgeous by the way) and he sent me a proof to review before it went to print.  We would hire Dave again in a heartbeat.  Wedding photography isn't cheap (Dave's pricing is in alignment with the other photographers I met with) so it's important to feel that your money was well spent.  I feel so lucky to have such beautiful photos to remember my wedding day by. More...

Dave was very receptive and easy to work with. He is a great photographer, with a good sense of composition. He stays within your comfort zone to make sure he gets the best shots with the best cameras out there. We felt like we could trust him. Now we have excellent, memorable photos that are unique and exciting - we've received many compliments. More...

Dave did a wonderful job with both our engagement photos and wedding photos. He was always easy to get in touch with, and very easy to work with. We got the photos extremely quickly and loved the results! More...

We used Dave Suarez for our engagement photos and the wedding day and he captured some wonderful memories! We felt he was reasonably priced and flexible to work with, even meeting us half way between his place and ours to chat.

He came to our hotel first to take pictures of getting ready. (Just fyi most vendors require you to pay for their parking, especially in the big city). Since we didn't have too much time, it did feel a bit stressed. Just not ideal amount and he seemed to feel rushed too. Got some good shots though.

Ceremony pictures were good too. He captured a lot of great facial expressions and moments throughout the ceremony. He wasn't able to move around too much in the church (per church request) so I think he was limited.

My favorites though came from the city! We had 3 hours on a trolley with our bridal party to take pictures around Chicago. He and a second photographer, Aaron, came with us on the trolley as we stopped at multiple locations. They were very fun and outgoing and seemed to have a great time. Both were easy to work with, especially during this time and made us all feel relaxed and natural. Dave also had some great suggestions for ideas and places he's gone before. He definitely knew the city and some great hot spots for pictures.

At cocktail hour he did an awesome job of taking pictures of lots of guests. He was able to show us through pictures all the people that were there and enjoying themselves. This was fun to see as we were not at the majority of the cocktail hour.

He shot some great pictures of details of the reception, truly captured on film our happiness and excitement for the day, which we will remember forever!

Dave took lots of pictures and was able to send us the "best of" ones within a couple of weeks. We appreciated the quick turn around because we were eager to see them and relive the event. :)

As mentioned several times earlier, he captures the day entirely and does a great job of it! My only comment, which comes from more a personal style and taste, was that he didn't necessarily have as much of an "artistic" side of film as some photographers might. Different angels, focal points and perspectives were not used as much in his shots. They were more straightforward (if that makes sense). I love close ups, candids and pictures that could be used as "artwork" as opposed to portraits. Again though, this is more a personal style choice for me.

I HIGHLY recommend both Dave and the other photographer, Aaron, as they were both great people to work with, reasonably priced and truly documented our big day!!! More...

Dave is fantastic! We interviewed several photographers and chose Dave immediately after our first meeting based on his great personality, the quality of his portfolio, and pricing.

Our engagement and wedding photos are wonderful. He made us and our family and friends feel comfortable and relaxed while shooting and captured tons of great candid moments. We recently received our Graphi wedding album, which is awesome!

We can't say enough good things about Dave and the service he provides! More...

Dave is fantastic! We interviewed several photographers for our wedding and chose Dave immediately after our first meeting based on his great personality, the quality of his portfolio, and pricing. Our engagement and wedding photos are wonderful. He made us and our family and friends feel comfortable and relaxed while shooting and captured tons of great candid moments. We recently received our wedding album, which is also awesome!We can't say enough good things about Dave and the service he provides! More...

I've admired Dave's photographic talent for almost 30 years.  His iconic photos of rock stars touring in the 80's are still showing up all over the internet.  My wife, Bridget Ball and I, had head shots done by Dave back then, and he photographed us on stage at the now legendary "JB Scotts" in Albany, NY.  ( if I can only figure out how to look like that again now... ) Technical expertise can be taught, intuition and timing come from a lifetime of honing one's craft, bring these things together and you get Dave Suarez Photography. More...

When we met with various wedding photographers, we were looking for someone who would make my husband and I comfortable on our wedding day while also being assertive enough to manage our large bridal party and families. We thought Dave would be that guy, and he proved it at our wedding this weekend.

It was fun to have Dave with us all day. He quickly built a great rapport with our bridal party and families to keep everyone smiling and comfortable. Although he was fun to have around, he also kept everyone in order so that our group picture opportunities ran smoothly. Throughout the ceremony and reception Dave moved around for candid shots without us even noticing.

Our wedding was just a few days ago so we don't have an album yet but I will update when we get it. I can say that Dave did a wonderful job with our engagement photos. We highly recommend Dave as a wedding photographer. More...

Dave Suarez is an amazing photographer. We had so much fun working with him for our engagement photos and wedding. Dave is very responsive which is something that I did not find to be the case with many photographers. He is professional, courteous, and friendly. The photos that Dave took of our wedding were truly so beautiful. I was so happy to see so many views that I didn't get the chance to see as a bride. His candid shots were fantastic and make me smile every single time I look through the photos. We have not received our albums yet from the wedding, but we did see some samples of his albums when we signed the contract and they were really amazing, so I'm expecting the same for ours when we receive them. I highly recommend Dave and his services. More...

Dave was very professional as well as personable. He was very easy to work with and helped us to relax on the wedding day. He took all of our thoughts and ideas seriously and was able to capture special moments that were important to us. He was a lot of fun to work with and made our pictures unique. We were very pleased with how our pictures and album turned out. Thanks Dave! More...

Dave was really wonderful to work with. His professionalism mixed with his great sense of humor made the taking of photos so much fun on our wedding day. The photos are just incredible! I highly recommend checking out his work (and pricing). Thanks again Dave, you�re the best! More...

Dave does an excellent job of capturing the day through formal and informal photos. He gave us many to choose from! His prices are very reasonable for the high quality of service he provides. A little slow on getting the photos on the website, but well worth the wait! More...

Dave has a great eye and the pictures were fantastic. I love having acess to our pictures online.

Dave was one of our favorite vendors to work with. He is extremely helpful and very flexible.

He was very nice, and took a lot of good pictures.