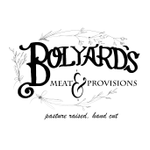 I just ate the best pork chop I’ve ever had, after taking the butchering class today. Absolutely delicious!

Made our first trip there yesterday. The most amazing selection, the most knowledgeable, helpful, and accommodating staff. A+++

Stop by to see what’s available or call ahead so your order is ready to go. Definitely check out the Tuesday chicken and Thursday smoke-out options for those days you don’t want to cook.

The feisty bull sandwich was amazing!!!!

Everything one wants from a butcher. Knowledge, skill, locally sourced and quality products.

Went for the first time on Saturday and bought a pork tenderloin to make for Sunday dinner! Amazing! So fresh and you could just taste the quality. I will become a regular!

I love this place. The people are great and so knowledgeable. They also seem to have every kind of meat but just get there early because they run out. I'm here just about every day. Awesome. More...

Just cooked and served one of there fresh brined turkeys for Thanksgiving dinner. Absolutely the best turkey I have ever done. Definitely the place to go for quality meat!!!! More...

This is a very fine, family-owned butcher shop. The bone broth is the best I've ever had and the meats & handcrafted sausages are wonderful.

Stopped by to get some chicken, bone broth. Had the Italian Stallion. One of the BEST sandwiches I've had in a long time. Really nice people, a GEM!!! Can't wait to go again.

Off da MF HOOK.
Dats all.

I have never had a bad experience here! The customer service is as quality as the meats they have. They get to know you and provide amazing meats. Their sausages and bacon selection are the best. More...

Stopped in and had lunch and picked up an entire belly of slab bacon, the service was great, and the meat was amazing!

This the best tasting meat, worth every penny. Cooked our first strip steak last night, WOW! So glad to have found a local, antibiotic free meat source. You really can taste the difference, grocery store meat just doesn't come close to this. I doubt I will buy meat anywhere else. More...

I just stopped in there to get something to make with dinner. Chris greeted us immediately and let me look and they answered any questions I had. Provided some ideas and then took the time to explain cooking grass fed beef. I have found a new place to purchase meat from. Great service, great cut and will be back and recommend to any and all friends. More...

Went there yesterday to get some steaks. I don't know much about steak cuts but they were very helpful and we got the sirloin cut. My dad doesn't like a lot of fat on the steaks so this cut worked well. Threw them on the grill and they turned out amazing! You get what you pay for and their meats are top quality. I highly recommend! More...

I attended the hog butchering class today and was absolutely impressed. Chris and Alex gave a great demonstration of carving up a pig carcass, making sausage, and giving advice on how to season and cook it’s many parts. They were both friendly, enthusiastic and completely engaged. I left with a couple of beautiful chops and several links. I cooked it all on the grill tonight and couldn’t be happier with the freshness and flavor. Well done! More...

Since they opened about 2 1/2 years ago in Maplewood I've heard nothing but rave reviews and good buzz about Bolyard's Meat & Provisions. ..but had never checked it out...until yesterday late afternoon when I was between errands and near their neighborhood. Although the butchered meat options looked good I wasn't in need of anything at the moment. And their sandwiches and Tuesday/Thursday takeout dinner selections will be worth another trip back. But I did get 1/2 lb of freshly sliced roast beef deli meat and a couple of their house made biscuits made with lard and locally-sourced buttermilk. The cooking stocks and bone broths they sell looked great and I'll definitely pop back to try those! They also sell rendered fats: lard, tallow, and chicken schmaltz. I bought a small container of schmaltz for roasting potatoes and vegetables, oh yeah.

So, this afternoon I made a beautiful sandwich with the biscuit and roast beef. I split the biscuit and lightly toasted it before spreading the insides with a little horseradish mayo and adding some sliced Havarti under the roast beef; then I topped it with some arugula and a drizzle of balsamic glaze. It was damn good! Seriously, the most flavorful biscuit I've ever had and the roast beef was 5 star!

Pimento cheese, on point. Literally the best meat I have ever consumed. Clean as Monk’s apartment. The Italian Stallion sammich is what dreams are made of. If I could make a candle to replicate the smell of the shop, I would use it every day. I love absolutely everything about this place. From the quality product to the friendliest butchers, you can’t go wrong. You’ll never find a better whole butcher shop. More...

Ordered the ham for Easter...was so nervous to try a new place. But man oh man...what a treat!!! People oh'd and ah'd over the smoky flavor and tenderness not to mention the leanness it was worth every penny. We also had never been there before and it was a treat to see all the types of cuts and chapstick etc. Next time we are getting the omnivurger it looked to die for! More...

Wow. Cool looking space when you arrive. Then that wonderful meat shop smell. Then the beautiful meats in the case.

I chose ham, braunschweiger and jerky. Ate jerky in car. Tore into the ham before i got home cuz it smelled so amazing.