Meeting the demands of security services in a rapidly changing and developing economy, our team deliver excellence to our customers with professionalism and clarity in a range of industries including corporate, events and hospitalist, construction and rail, private and public.

With a team of professionally trained and rigorously checked operatives, we provide man power with carefully planned and delivered security services to individuals, facilities and businesses. We have a wealth of experience working across a diverse range of industries to provide tailor-made support to meet the unique needs of each client we work with. This includes preparation, training of all security personnel on each operation we undertake, and maintenance of security solutions to meet your changing needs.

OUR MISSION
To build a stronger infrastructure within the UK security industry by integrating an effective solution that is financial and practical. Uphold and deliver the core values of the SIA with professionalism and integrity.

Worked with them over 3 months but from start day 1 after jobs getting messages that timesheets were wrong I sent wrong invoice etc later on found out that evwrytging was correct and got paid. Than in August I supply staff to 1 Love Festival. He asked 10 staff to start from friday night till Sunday night. 20 mins before we arrive on site got message from him that they only need 3 for night and rest will start in morning. We still go ahead and 3 of us put on position. We supposed to get food vouchers but the company who was on Site was TLG bunch of rude cunts didnt not offer even a bottle of water and made 3 of us to stand in cold and ask just 1 to patrol whole park throughout the night. By looking that we decided we will not work after tonight and let Task 4 Boss Tony aware of that. Next morning all of us left the site nd got message from tony that client doesnt want on site. Than when I invoiced him he said the client is not paying for us and he cant pay. I rang the client and ask why he is not payin for work we have done. He said (POC of 1Love from TLG) speak to tony we explained to him. Tony rang me back and he said he will pay me in a month time. After 1 month when i asked my money he said he cant pay on invoice it will be on cash as they paid him cash so i gave him my personal details. Every day when i asked he used to kept saying this day that day and last he said he wont be paying me at all I rather just work with him more and make up for money I lost. So now I told him I will be taking him to court so he better watch out he will not be getting away with it and he wi have bas reviews at every single place. More...

Good evening sir I am security guard Mr Gyanendra gurung I am levelling Ealing London Hanwell I am looking for full time security job I am fixeble person sir I don't maind Day Night Sir. I want to loung hours & I had been 100% responsibility in my job sir plz call me 07378887138 sir Thank you Reagrds More...

DO NOT USE If you actually require security at your event!

The first name of the security guard they were going to send me was actually fired just before my event. I would expect an employee that is under investigation to not be sent to an event in the first place, especially if the termination of employment was so quickly done. The second security guard despite confirming his attendance decided not to turn up at all, without any warning or explanation. NOTHING. And still hasn’t had the decency to respond to my messages or call me back. I messaged prior to the time he was due to attend to make sure everything was okay and called over 10 times on the night after he still haven’t arrived after half an hour. He didn’t bother calling back at all and still to this day haven’t heard from him and despite reading my messages, not replied.
The “director” of the company called Tony said he pried himself and the company on being reliable and would attend an event himself if a security guard did not turn up however his phone was completely unavailable throughout the whole night. He said he would investigate the reason the security guard Adey didn’t turn up and called me back on Monday morning being rude. He said the guard didn’t turn up because he was stuff in traffic!

Whole event was ruined by the stress caused by having to do the security of a 16th Birthday party for 55 people myself! Completely disgusting and unprofessional behaviour. I will be providing a bad review for this wherever possible.

We asked Task4 to provide security services for the marquee prior and post event and on the event security management. They were highly professional, smartly dressed and were quick to help when needed. Would highly recommend

Thank you, was a pleasure to work with and hope to provide services in the future. Kindest regards TASK4

Have worked along side Tony and his staff on many of occasions and it’s always a stress free experience. Very professional 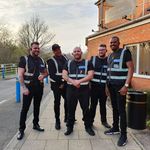 Delivering Customer service and creating a safe environment for both the client and its customers.

A sudden fall in the quality of work and security personnel, I decided to make a difference. I passionately enjoy security in creating a safe and secure environment for both customers and clients and whilst uphold fantastic customer service.

Our core values reflect our work ethic and each member of staff is continuously reviewed and put through training to ensure these values are delivered on every assignment.