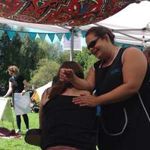 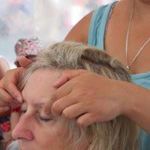 I’ve now had two wonderful massages from Sally and I am looking forward to many more sessions. Sally has a knack of pinpointing the tight spots and releasing them. Sally is so passionate about her work and that is really clear from the quality of the massage. I’ve usually got hip pain and shoulder pain, after an hour I feel pain free. More...

Fantasric massage, Sally has a beautiful soul, so friendly and welcoming. Sorted my sciatic pain in just one session. just had a lovely 2hr session, massage and reflexology. Bliss.

A whole course of physiotherapy was not as effective an hour of reflexology with Sally. I went in with a stiff neck, pain in my shoulders and upper back and less than 8 hours later I feel almost free of tension and pain. Really amazing result.

The massage got straight to the problem areas and left me feeling great. Sally is also a inspiring person to meet. Would definitely recommend! The best massages I’ve had.

Sally is the best . She is absolutely incredible and has made me feel so much better . She is so experienced and her hands are just magical . She even managed to unblock my stuffy nose using reflexology, and my sinuses are so bad that i can unblock my nose without a nasal spray. She is one of the most amazing people i have had the chance to meet . I will recommend her to everyone I know . Thank you for making my day so beautiful . You are an incredible human being , and if this world had more people like you, it would be a magical place ❤️ More...

A fantastic masseuse, I've benefited from a number of treatments now, can highly recommend!

Sally clearly talked me through the session so I knew exactly what to expect. She was very intuitive to any aches, pains and old sports injuries I had – even shin splints from years ago! I felt thoroughly relaxed and confident that I would feel rejuvenated after my treatment. I can’t wait until my next trip to Bristol! More...

Sally has attended many events with me at The Beauty Event including The Pamper Area of Women Outside The Box festival in 2013 and from the very first moment I met Sally (& Lillie ! ) I knew she'd be a great asset to the team ! Sally's friendly and open nature is addictive and you just want to be around her ! And it is absolutely no surprise to me now to anticipate that guests will come away from their treatment with the highest of compliments and often saying it was the best massage they have ever had ! I'm looking forward to working with Sally again on many more events. More...

I've had 3 treatments from Sally. All 3 have been great and fixed the little twinges I've had. Also, she is amazing at fitting you into her busy schedule

Excellent treatment from Sally whilst at our sailing world championships. She has managed to free up my knee which has been causing me problems for a while. ��

Just floated home after a lovely, throughly relaxing massage. Sally is very knowledgeable and considerate and will certainly be seeing more of Sally (and Lillie) in future �

Having a relaxation expert with us from Rodriguez relaxation has really benefited the team we will have our twinges and aches and pains. Having Sally here is an absolute godsend to the team Gbrblindsailing. More...

I've been treated by Sally for over a year now, and I'd recommend her massages to anyone who suffers with stress or anxiety, or who just wants to recharge and take some time out. Sally is a wonderful, compassionate person and I think she could convert even the most sceptical to the joys of massage. More...

Sally is a fabulous masseuse. I had a very relaxing time and a lovely chat. Would definitely recommend to a friend.

I had shoulder massage from Sally at the vassal centre today and it was terrific, beautiful! I have a long-term condition in my shoulder joints and the relief Sally gave me from my pain and discomfort was un-describable. I would recommend her to anyone, for sure!! More...

Following the London marathon on the 22nd April, I was lucky enough to be provided with a post-run treatment from Sally Rodrigues, courtesy of RP Fighting Blindness.

Because the weather for the marathon was so much hotter than any run I have completed previously, I was really struggling with tight hamstrings and cramps, following dehydration during the race. Sally quickly realised which treatment I needed, and the areas that she needed to focus her massaging efforts.

Sally was obviously very experienced, and provided a thorough massage of my calves and hamstrings. Having been struggling to walk after the run, I was almost pain free after the massage, and my muscles felt much better! I really noticed the benefit of the massage in the two or three days following the marathon; where previously my muscles have been very tender after races, my legs felt much more mobile and pain-free!

As well as providing a brilliant and much-needed massage, I found it really interesting listening to Sally’s experiences of being a VI runner herself, and also her stories of sailing and cycling all over the world as part of GB teams. Sally was an inspiration to me, and was so encouraging of my fundraising and running for RP Fighting Blindness.

Thank you Sally for the brilliant massage, it was great to meet you, and I will definitely be back for another treatment if you’re in London next year! More...

Great the best in Bristol

I love people. I get a great deal of job satisfaction from witnessing the before and after of a treatment and seeing people feeling blissful.

I retrained from law to complimentary therapy at the same time as being selected for the GB sailing squad. I wanted to realign my personal goals with my professional career.

My treatments are of a very high standard and I have 100% customer retention. My clients frequently say that they feel reset, uplifted, tranquil, free, taller and slimmer. I view each treatment as a workout for myself which ensures the client receives a high standard massage with an energetic approach.

Leave a review for Rodrigues Relaxation